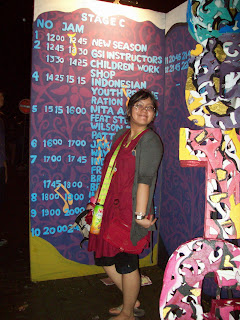 Alhamdullilah, when i wake up this morning, my body is getting better. Thus, as planned, i decided to went to Jazz Goes To Campus at Universitas Indonesia Depok. JGTC is the oldest jazz festival in Indonesia, this year is their 32nd annual festival.

What i like for this year event is their sponsor is not from ciggarete company anymore (talking about no smoking campaign and go green campaign :)). And the stage is better than last year ( i think they learnt something from last year's event) :D. and i also noticed, that this year, they properly prepare for chance of raining, which is, of course, raining all over from 5 - 9 pn. :(

Oh yes, when i got there, raining is start. Since both of us is hungry, we went to food and beverage stand and got kebab as our late lunch. After that, we went around the stage and stopped at stage C to see Nina Aartsen and Jakarta Broadway Team. I like Jakarta Broadway Team (which consits of UI students i think) they are so theatrical and energetic, reminds me of black american people when they make a vocal group :) ) 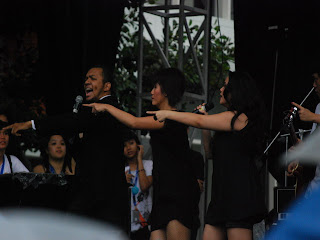 After that, because of heavy raining, we went to the bazzaar and got cutey and cheapy stuffs. Oh, i love the fact that im on campus area because the stuff that they got there is unique and cheap :p. We back again to stage A and saw ecoutez. But because it's raining and lot people bring umbrella, we can't see anything. all is umbrella, but the performance of ecoutez is good :) we love it.

After that, we went to stage B. they got roof that make us protected from rain. we decided to passed maliq & d'essential (owh, in all jazz festivals we got 'em), kulkul , olma ong and Balawan. we thougt it was just useless went there and can't see anything, instead only listening them under the rain! 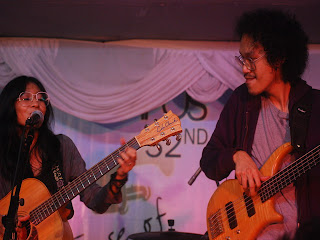 We were waiting for Endah n Rhesa. Before that we got eriksondhy project. Endah n Rhesa was brilliant, as usual. Sweet thing is they got married next week. They show off their engagement ring. Aw, so sweet, i just knew that they're couple, no wonder they got so much chemistry in their performance :). When i was in blues festival, lot of people didnt know their song, in JGTC, those college students know by heart and sing together. awh! i think i have to buy their CD :) they sings " i dont' remember, when you love someone, uncle jim and few songs"

then we heading home, i say bye secretly to Olma Ong and was happy to see Endah n Rhesa again.

I like JGTC this year, we also has been prepare it better than last year ( we got rain coat, umbrella, jacket, etc). My opinion is since this is a good jazz event, and they has already know that almost every year they got raining, why dont they move it into 'dry season' like from May - August. My bf (who is lecturer) said that in November-December, all that college students have their free times so they can make such a event like this. Well, i think is more nicely that they move it on july/august since the open-air concept that they uses are needed more sun than rain :)

Next week is JakJazz, but i think we passed it. and the ticket for Java Jazz has already on sale. We will check that we want to buy it or not, since Java Jazz really like bazaar and lifestyle event than Jazz festival itself.

ps: what i love about this event is... i feel 5 years younger since i surronded by college students. ihiy :D
Written by bulan at 4:37:00 PM